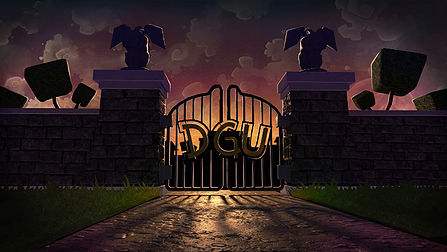 Death God University (or DGU) is my Internship project in DSK Green Ice Games in Pune, India from July 14th to December 31th 2014.

D.G.U. is a 3rd person 3D adventure/puzzle game where the player plays as a student of the Death God University studying to become a death god assistant. Set in a wacky world, DGU takes its inspiration in the old point and click adventure / puzzle games like Day of the Tentacle or Sam & Max. In order to get graduated and pass to the next class, the player needs to kill collect souls of targets assigned to him by his teachers.

To do this, the player can gather items and craft deadly trap, decoy device and/or use the environment to his advantage!

There is only one rule!

As a game designer my task was to take the prototype, produced by the students of DSK Supinfogame the previous year and designed to be a mobile game, and to make a PC game out of It.
The task was to change completely the ergonomics, the type of fun and the difficulty.

As another task given, i was charged to develop a coherent universe for the university, based around death and the various Death Gods and psychopomps of different cultures and countries.
I had to adapt an existing concept to a full game, while keeping the spirit of the game, not only on the graphical aspect but also on the universe and somehow the gameplay.

As a Level designer my task was to develop a Narrative Structure and a content coherent as well as interesting for the different quest givers in the game.
From this content and some given constraint relative of the targets, I had to develop two levels and their respective multiple walkthroughs.

The game is actually available on steam and Xbox One